Posted on August 6, 2014 by patriciastevens

Sunday we headed back up the coast to Inkwenkwezi for the Jekelezi Festival, almost like a country fair where everyone parks in the field.  On Saturday we had bought some souvenirs down on the Esplanade where the African traders display their wares, but John, from Kenya was out of the special thing that I wanted.  We found out in conversation that his wife, Ruth, would be at the Festival, and we could get it there.  What a sweet woman. 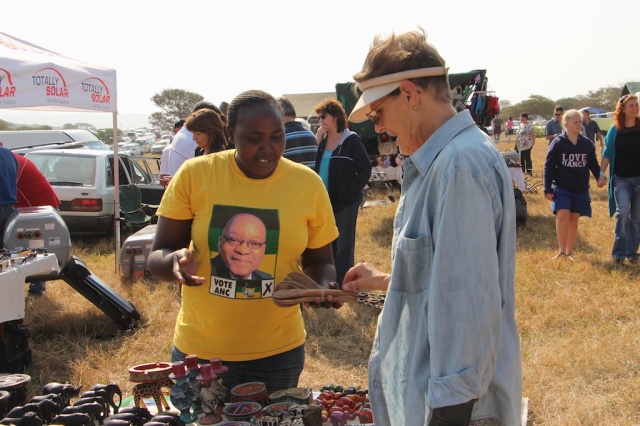 They have two children born here in SA, but they took them home to Kenya to be with John’s mother so that both he and Ruth could work and have money to send home. What a life; we are so lucky.

There were all kinds of rides for the kids. 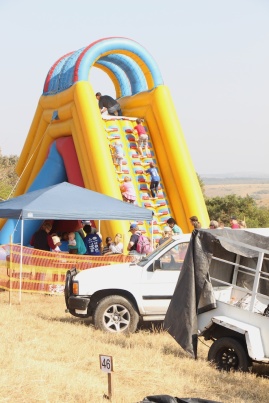 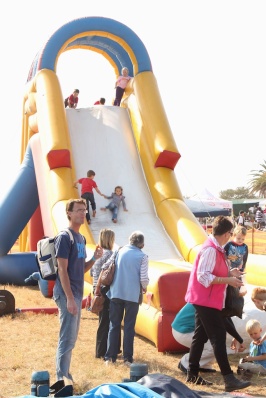 The Mama Tofu Dancers were a treat. 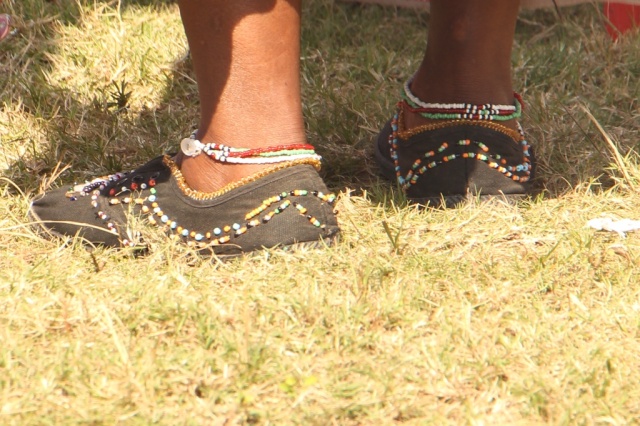 The pictures don’t do them justice without the movement and music, which was a drum played by one of the women accompanied by their singing. 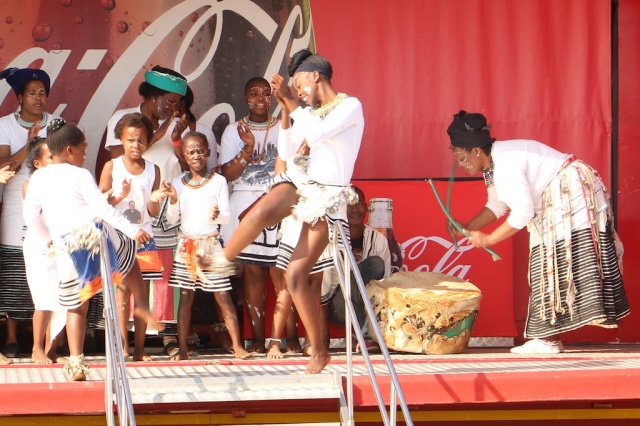 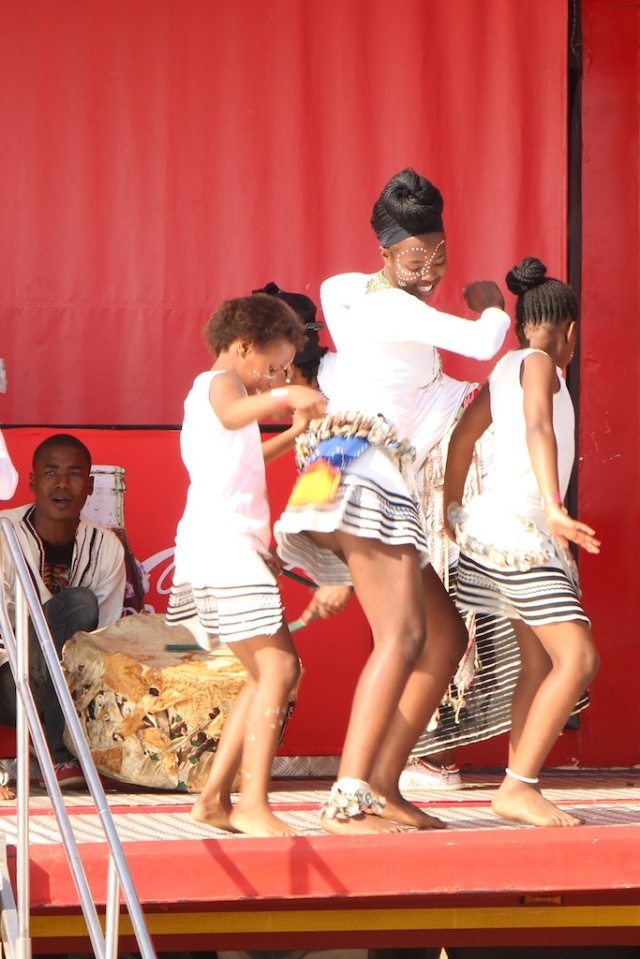 The star was certainly the oldest girl who was incredibly athletic, and all eyes were on her. We later saw them in the tent where the local crafts were displayed and teased the mother, “This one will be trouble!”  They all enjoyed a laugh while the girl demurred.

We left the Festival and went over to Chintsa and the most amazing beach, like Nahoon at the mouth of a river, which was wider and longer than Nahoon where we walk but with no reef.  From across the river and above in the fog, you get the idea.

I never pass by an African vendor without buying something; they have nice things and need to eat.  This man from Malawi has the biggest dreadlocks I’ve ever seen. 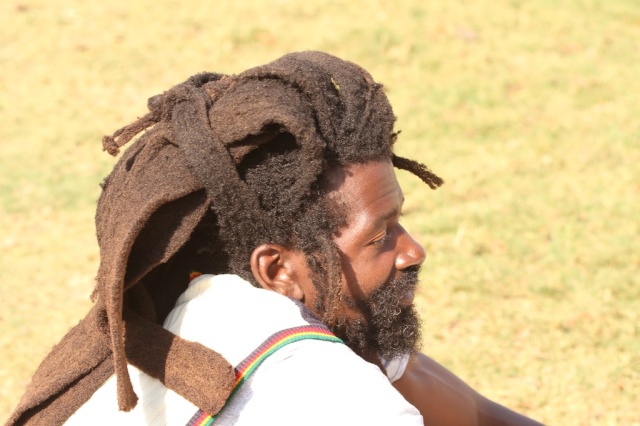 We met several students from New Mexico and California who were staying nearby and doing a veterinary internship at a local reserve.

Nearby, the (Southern) Masked Weavers were very busy weaving their hanging basket nests. 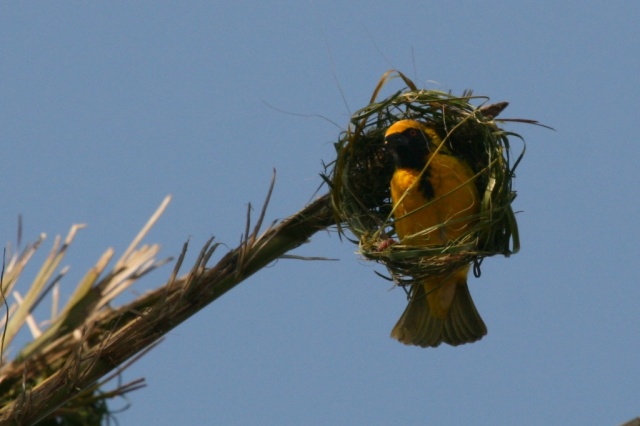 Monday started out as an ordinary day, monkeys running through the trees, an Olive Thrush right outside my window,

a gecko on my wall, 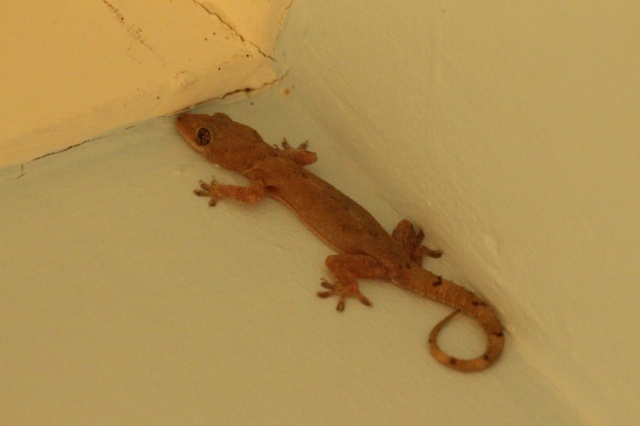 except that I left a small open container with several pieces of cooked chicken meant for the dogs (in small bits) on the counter. When I wasn’t looking, Tommy reached up and woofed it down in one gulp, bones and all.

With low tide at 2:44 pm, we headed to the beach for our daily dog walk at 12pm; plenty of beach and growing.  As we approached the end of the walk, I missed a beat and didn’t put Rassie back on the leash soon enough. He totally ignored my calls, and off he went into the bushes.  It was 1:15 pm, and we were hungry. As time passed, we decided to get takeout from the Blue Lagoon Hotel next to us, eat on the beach and wait.

By 3:30, we were a bit worried when he still hadn’t come back, especially given the stories we had heard about people setting traps for the dogs in the bushes.  But then someone said they had seen him way down the beach almost to Bonza Bay, very far from where he originally went into the bush chasing this plump little guy, the Hyrax, also called a rock badger.

So for the first time in the 2 months that we’ve been here, I drove (on the left side – right side steering like Australia) down to Bonza, and Michael stayed in case he came out of the bushes.  No Rassie.  When I got back, walking down the steps, I was thinking that we would have to leave soon as we lost daylight and that I would hate to leave without him.  And there he was, just walking up the steps towards me as if it were a normal day. So relieved.  But then, where was Michael?  It took another 30 minutes for him to show up as he had walked down to Bonza on the beach. This crazy day ended with a big glass of very nice wine!  We were doubly thankful he had found us when we had a huge, loud thunder storm and rain that night.

Tuesday we went back to photograph several birds who come to fish as the day is waning. The Pied Kingfisher

and the ever present White-fronted Plover

and in the bushes 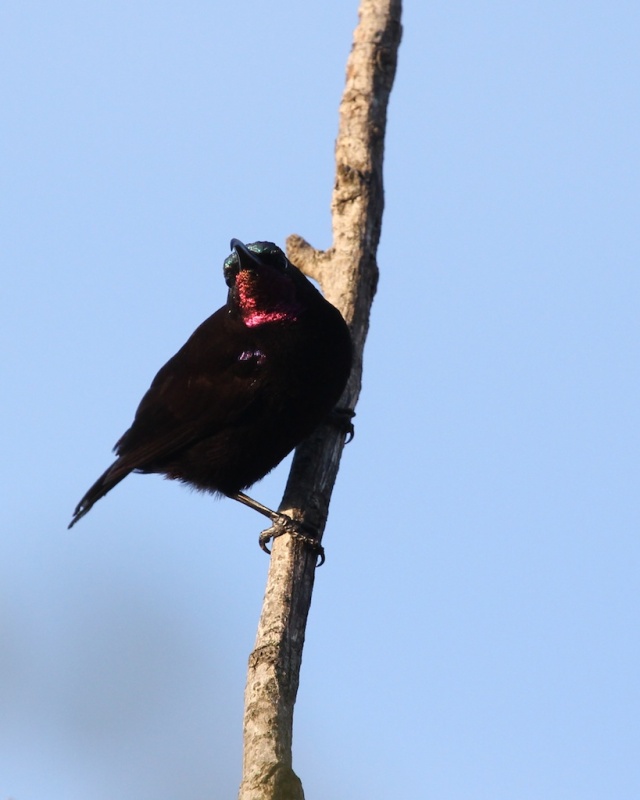 the male (above) and female (below) Scarlet-chested Sunbird

And so ended another successful day.

This entry was posted in Uncategorized. Bookmark the permalink.